Why is Menopause in the Age of Information Still a Taboo? 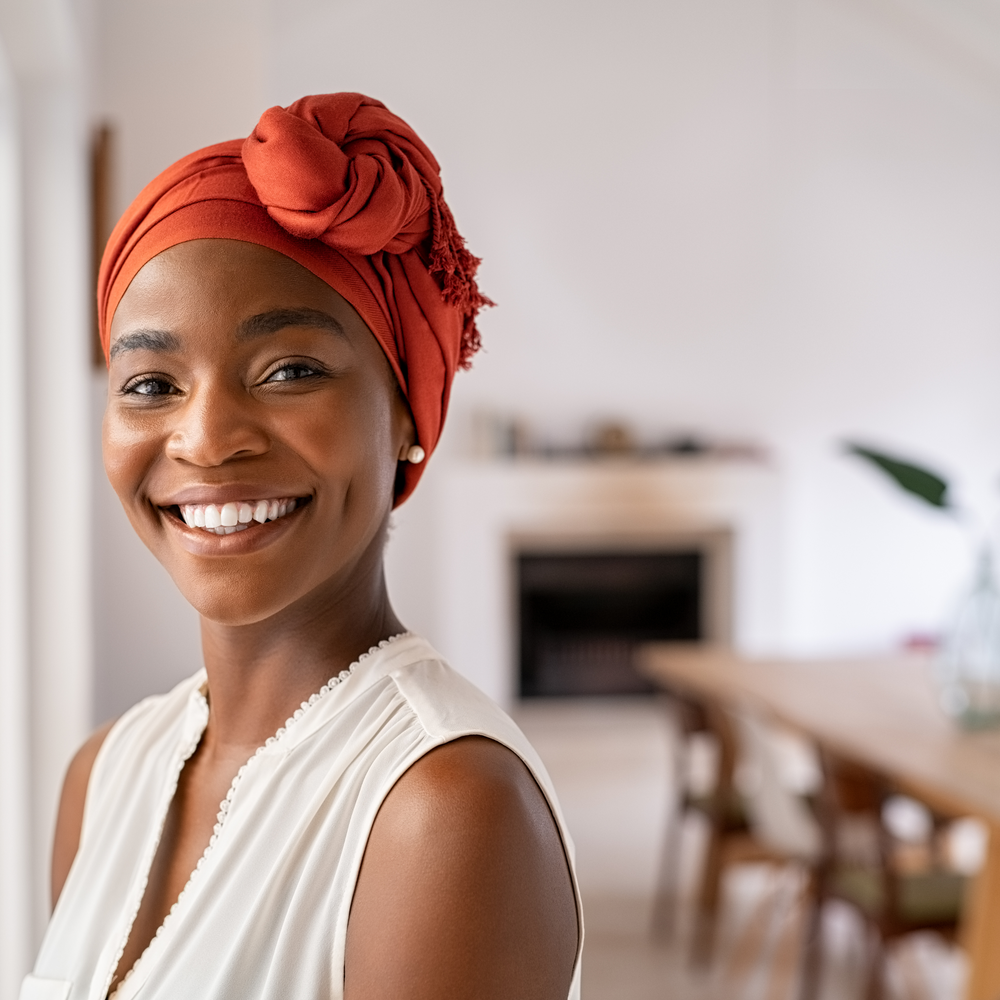 It’s so good to meet you. Let’s start with an easy question that is never answered the same way. What was your experience with menopause like? And did you know what to expect? Were there any surprises?

Nice to meet you. You know what I think I started my menopause relatively early on, it was in 2017, and I was surprised at how long the whole process was. I don't think people really tell you that. I was surprised by the range of symptoms. I was always someone who's always been very much into holistic medicine. Unfortunately, I was very surprised at how some things just didn't even touch the symptoms. It was so dramatic. So I think I entered menopause feeling like, oh, I went through puberty, so I know what to expect.

There were changes in hormones. It wasn't that great, but I managed it once before so how bad can it get? I kind of thought menopause would be a similar kind of thing. But it wasn't like that. It was a lot more dramatic. I had a lot of different symptoms, like really heavy bleeding. I had checkups for the bleeding because it was really severe. After that, it got to the point of having all the traditional symptoms - night sweats and etc.

It was quite hard to manage symptoms. You have these mental battles and a lot of ups and downs. The worst of my symptoms came when I was in lockdown and homeschooling. I’ve always been active and done a lot of exercises. I also have celiac disease, so I’ve eaten a really great diet but this was too much.

At what point did you know that it was menopause?

Well, I got my blood levels checked and the doctor said things were starting to change. It was perimenopause.

I know you work with Louise Newson and I think she's done a huge amount of work to bring the information to women. But when I was starting to experience symptoms, that information wasn’t there. In the short time from 2017 to now, there's been a huge change. And I think that's amazing. I'm so happy that, now that I've got friends that are going through it, I can easily send them resources, whereas, for me, I had to fight to get a blood test.

It’s also a tricky test, to begin with because your cycle is constantly changing. Your hormones are changing, so it's hard for them to pinpoint where it is and you need to get tested at a specific point in your cycle. I also think we're all conditioned to look for evidence. For example, when you suspect a pregnancy, you can pee on a stick and get the result right away, but there is no such test for menopause.

To get back to your question, I saw a nutritionist that I’ve been following for a long time called Christine Bailey. She was offering a menopause program and I was ready to change things up. I really valued her opinion. So she does a club called The Leaning and Club that you join, and then she gives you food plans. She does webinars, and lots of information for people, not just on menopause, but other things as well.

I joined her program and I could see the value of doing certain things like fasting and changing the way that you eat. Diet, nutrition, lifestyle, the whole thing. And so I feel like I've just been on this menopause journey for about a year and a half. When I started I was already eating really well and exercising and doing some self-care. Since I have celiac disease, I regularly get my blood tested and I was concerned about my bone density since I found out in my research that it can be affected by menopause. The test showed that my bone density had gone down and it was a real shock to me.

Did you implement any changes after your first GlycanAge test?

Yes, there's been ongoing changes that have been happening using Christine Bailey's support. So my initial GlycanAge result was really good. But as you could see, there were a lot of things that could actually improve. And so that was like my benchmark. And that's what's been amazing about your tests, is that it's given me a benchmark of where I am.

You’re really disciplined. I’m glad you found what works for you. Can you talk a bit about your fitness routine? What kind of exercises do you do?

I normally work out about five times a week. I love Zumba, body combat, yoga, aerobics, aqua aerobics, and spinning. That was the other thing in menopause. I regularly checked my fat-to-muscle ratio. Over lockdown, the proportion just changed and that became a big driving force for me to build up my muscle mass. That’s especially important in menopause.

On my later tests, I talked to one of your specialists and they asked me about breathing, meditating, having more time to rest, having more time off, my social life, and all that. Menopause drives you to make a lot of changes in your life. It’s not just about supplements and HRT. It's your whole life. So you kind of put every little bit of yourself under the microscope and see what needs to change. 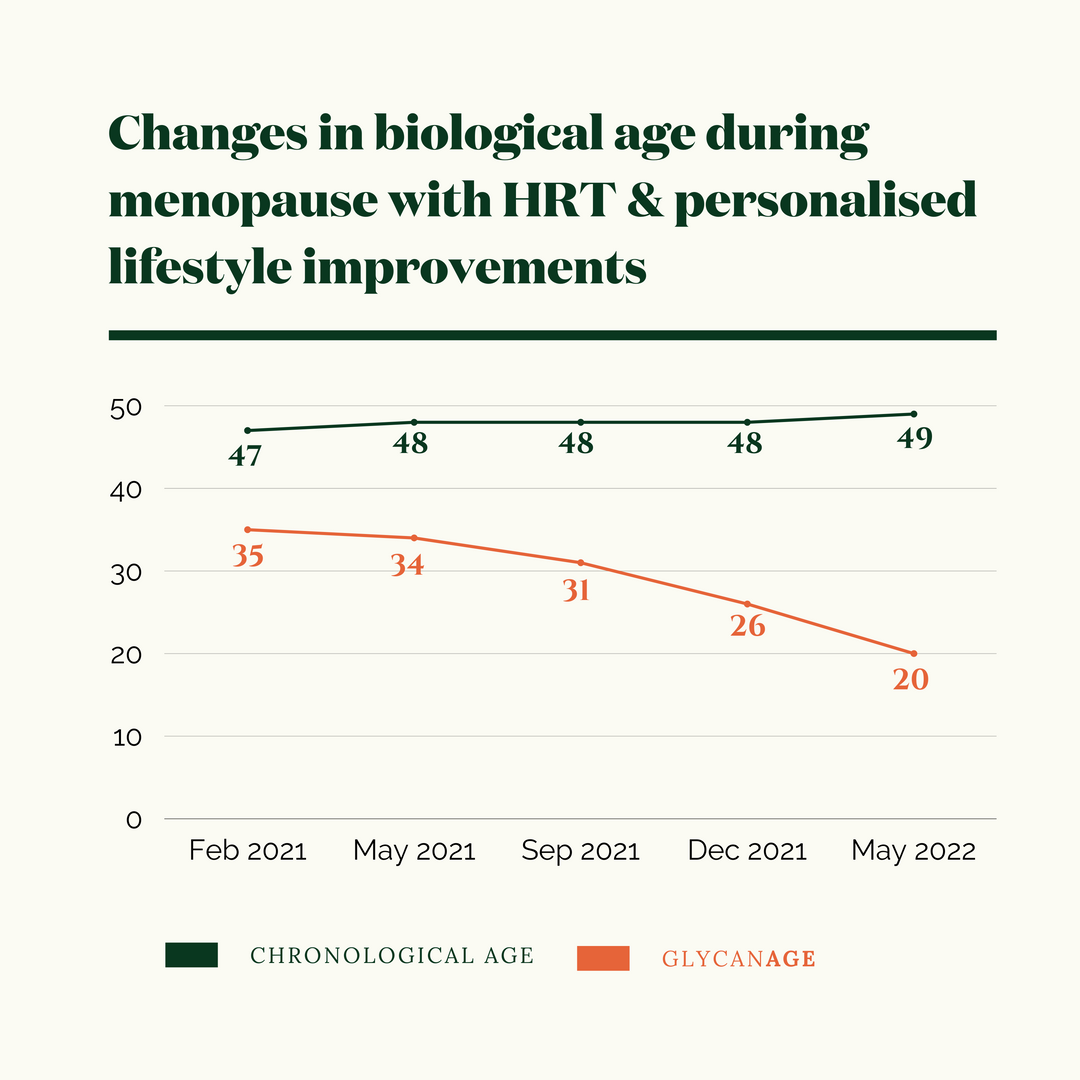 Can you tell me what was the biggest surprise for you during this journey?

I think there are two. The first one was how much the HRT affected my life and my GlycanAge results. I went from 35 to 20, and that was directly due to HRT. So I think the biggest surprise was that. You need to do everything you need. But I was really kind of really happy to see how the different things gradually work. The other big surprise was how my bone density changed because of menopause. That was a big surprise to me. And that was a big that was my biggest reason to go on HRT.

Yeah, that's a symptom that's not often talked about.

I know that Louise Newson says that people in their early forties should all get a bone density scan. So they've got a benchmark. And I think the other surprise for me was how much you're kind of left on your own in menopause. You need to fight for testing, and there's not really a lot of support for tweaking it. It's quite hard and the statistics of how many women and in turn how much our society is affected by it. The number of women that give up their work, the amount of time they take off sick, the amount of all the financial things… It’s just awful.

I wish it was a part of the school curriculum as well. It should be. When you're doing sex education at school, you should be learning about menopause, too, right? Every person in your life is going to either go through it or know someone who will.

Do you have any advice for women who are struggling with perimenopause and menopause symptoms?

Yeah. There are two things I would like to say. Do your research, and be as informed as you can about this change in your life. Don't assume that HRT is good or bad. Do your research, even if you've had breast cancer or something else. Find somebody that knows a lot about menopause and come to them with your research. I think that's really important and whatever you decide, it is a huge change in your life. Check out what needs to change because you definitely need to make some changes. And I think you're worth it. And your families and your jobs and society should have that time for women to reflect and work out what they need to do to be able to help themselves shine.

Women of all ages need to educate themselves on menopause because you could be at any age and have changes starting to happen. You could be in your thirties, twenties, whatever.

And the other thing to say is, be kind to yourself because there will be ups and downs, but make sure to get back up there because life is going to happen, isn't it? You're not always going to be on top.

So I think if you do have the resources, I think like GlycanAge and being able to monitor yourself, take advantage of it.